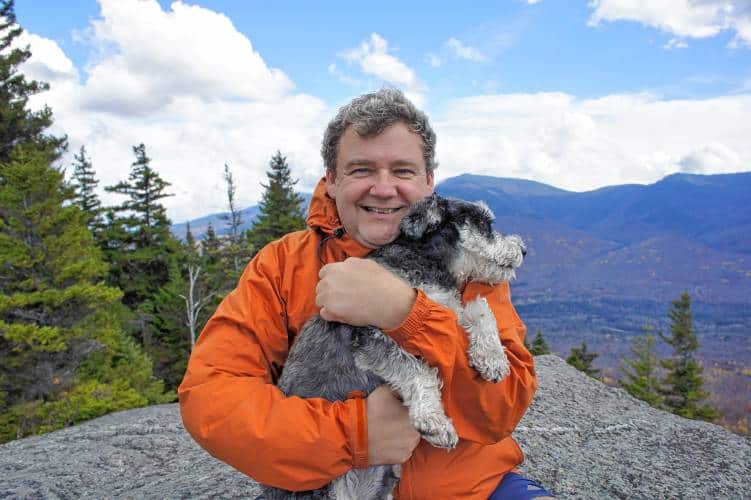 You do not want to miss this year’s Annual Celebration Speaker, Tom Ryan!

Tom Ryan served as publisher and editor of the Newburyport, MA, newspaper The Undertoad for more than a decade. In 2007, he sold the newspaper and moved to the White Mountains of New Hampshire where he hiked to more than 2,000 summits with his cohort Atticus M. Finch, a singular dog. They often used their hikes to raise money for non-profits, and because of their efforts, they were inducted into the MSPCA Hall of Fame and awarded the Massachusetts School of Law’s Humane-itarian Award. Tom is the New York Times best-selling author of Following Atticus and Will’s Red Coat. Both memoirs are based in the White Mountains.

Atticus passed on in 2016, which lead to the addition of two rescues, Samwise A. Passaconaway and Emily B. Hawthorne.

After nearly dying from acute kidney and heart failure, blood clots, anemia, sepsis, and a stroke in 2016, Tom has fought his way back to hiking the trails that felt like home from the moment he first stepped on them with Atticus in 2004.

The three live in Jackson, NH, where Tom is currently writing his third memoir and his first novel.

Join us on October 22 as we celebrate the past year of protecting and preserving the Blue Hills… and raise funds to continue caring for the park! While we will not be able to be[...]
View Calendar
Add