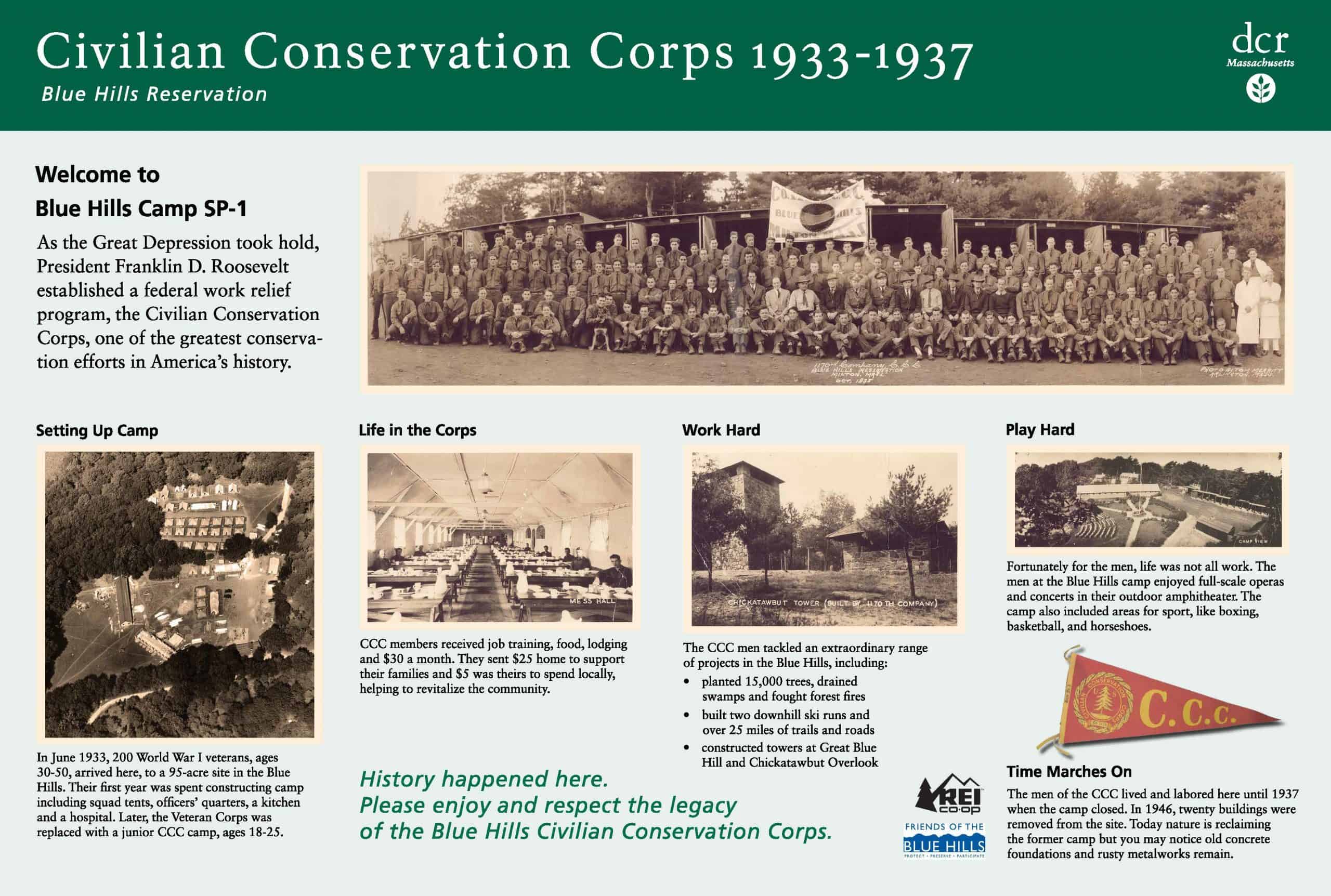 Friends of the Blue Hills received a stewardship grant from REI Co-op to fund the initial clearing of invasive plants and a new interpretive panel to commemorate the hard work and contributions of the Civilian Conservation Corps.

Over the past year, volunteers and staff from the Friends and DCR have improved the trails and cleared invasive species to uncover some of the hidden camp features.

On October 15th, the interpretive sign was installed at the former Civilian Conservation Corps site.

The interpretive panel highlights historic photos and descriptions of camp residents and their lives.

History of the Civilian Conservation Corps

In 1933, America was in the grip of a Great Depression when Franklin Delano Roosevelt was inaugurated on March 4. More than 25% of the population were unemployed, hungry and with little hope. President FDR acted quickly. Within a month of his inauguration, the Emergency Conservation Work Act was signed creating a federal work relief program to be “used for simple work, not interfering with normal employment, and confining itself to forestry, the prevention of soil erosion, flood control, and similar projects.” So, began one of the single greatest conservation programs in the country. 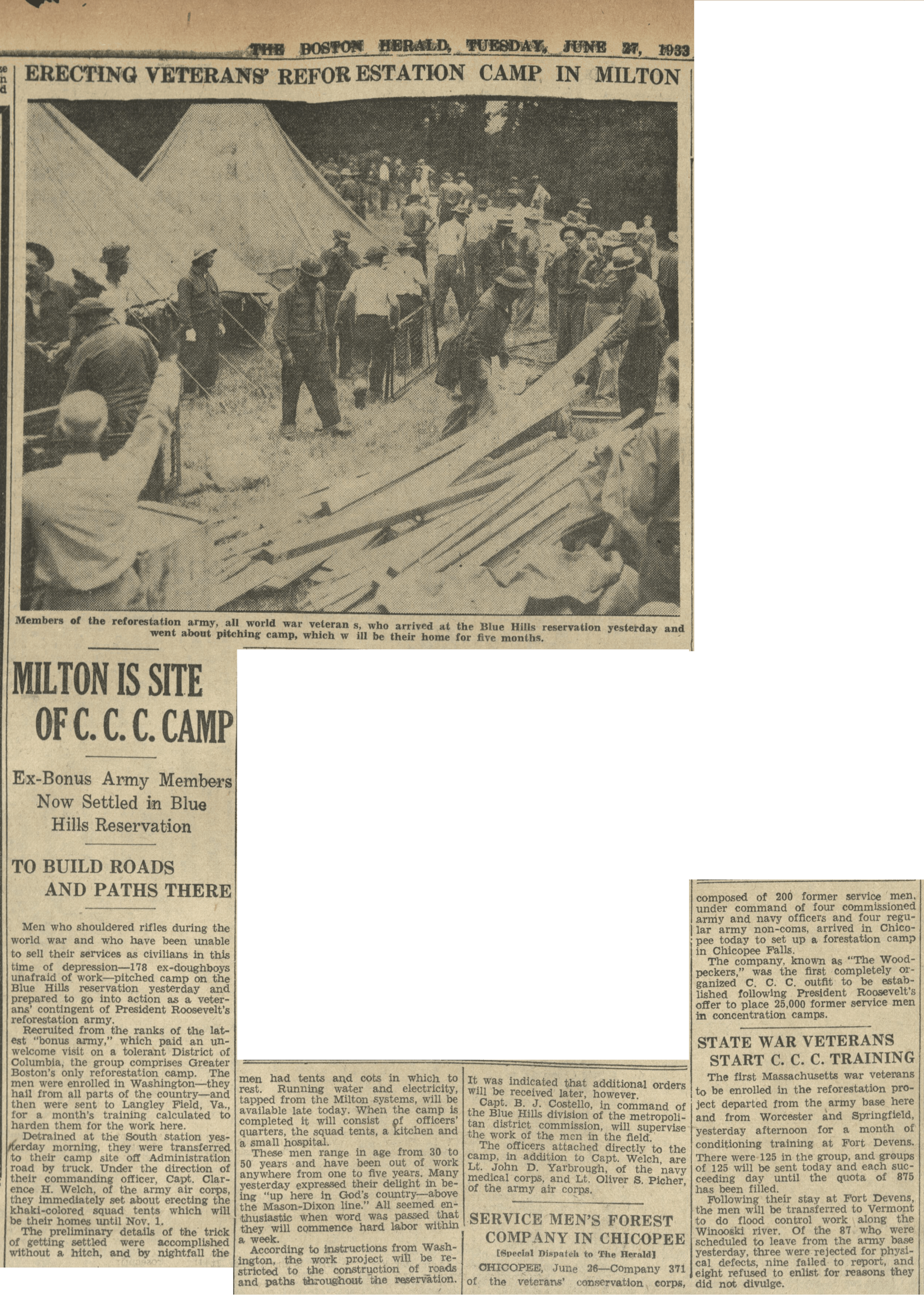 By June 27, 1933, 200 World War I veterans of the Second Bonus Army arrived at a 95-acre site in Milton. The Blue Hills Camp began as one of a small number of Veteran Conservation Corps (VCC) camps in the state. The Veteran enrollees range in age from 30-50 years and have been out of work from one to five years. Initially sleeping in canvas military surplus squad tents, the first year was largely spent constructing camp buildings to include officers’ quarters, a kitchen and a small hospital. The CCC came into operation so quickly that no advance preparations could be made, so enrollees literally carved their camps out of the forest, often working with only primitive tools. The Blue Hills site supported a veteran’s camp until August, 1935 when the veterans were replaced with a junior camp of unemployed men ages 18-25 years. 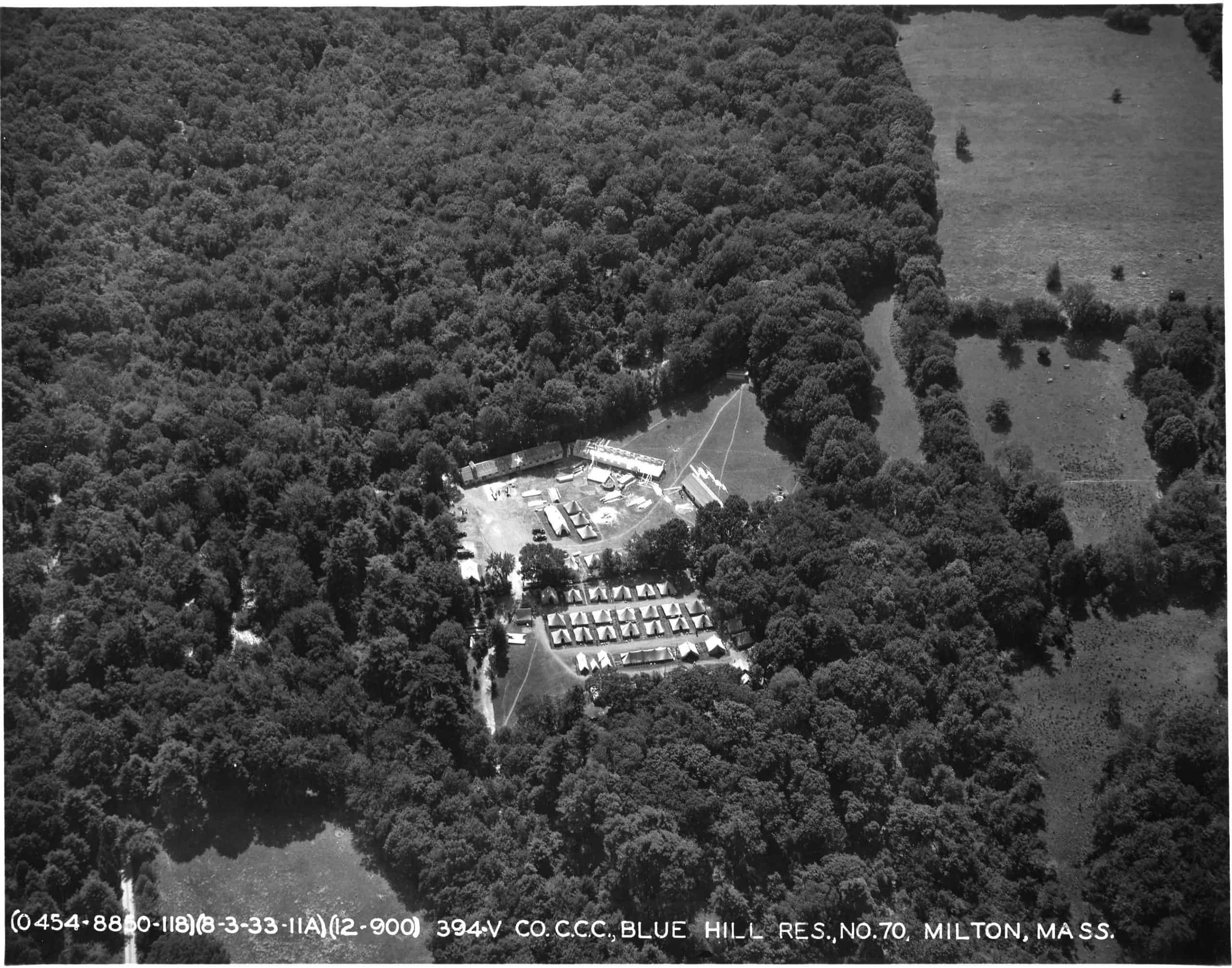 Nationally, a typical junior enrollee was between 18 and 19 years old upon enlistment, was from a family of six, his father was unemployed, he had completed eight years of school and had been without a job for seven months prior to entering the Corp and served 9-12 months. The men were issued uniforms and began each day with reveille and calisthenics. CCC members would receive training, food, lodging and $30 a month, literally “another day, another dollar.” They were required to send $25 of their pay back home to support their families; the other $5, spent locally, helped to revitalize the local community. The average enrollee gained 12 pounds of muscle through steady meals and hard work during their first six months in camp. For many of these men, the C’s may have offered them their first regular meals that they had in quite some time. 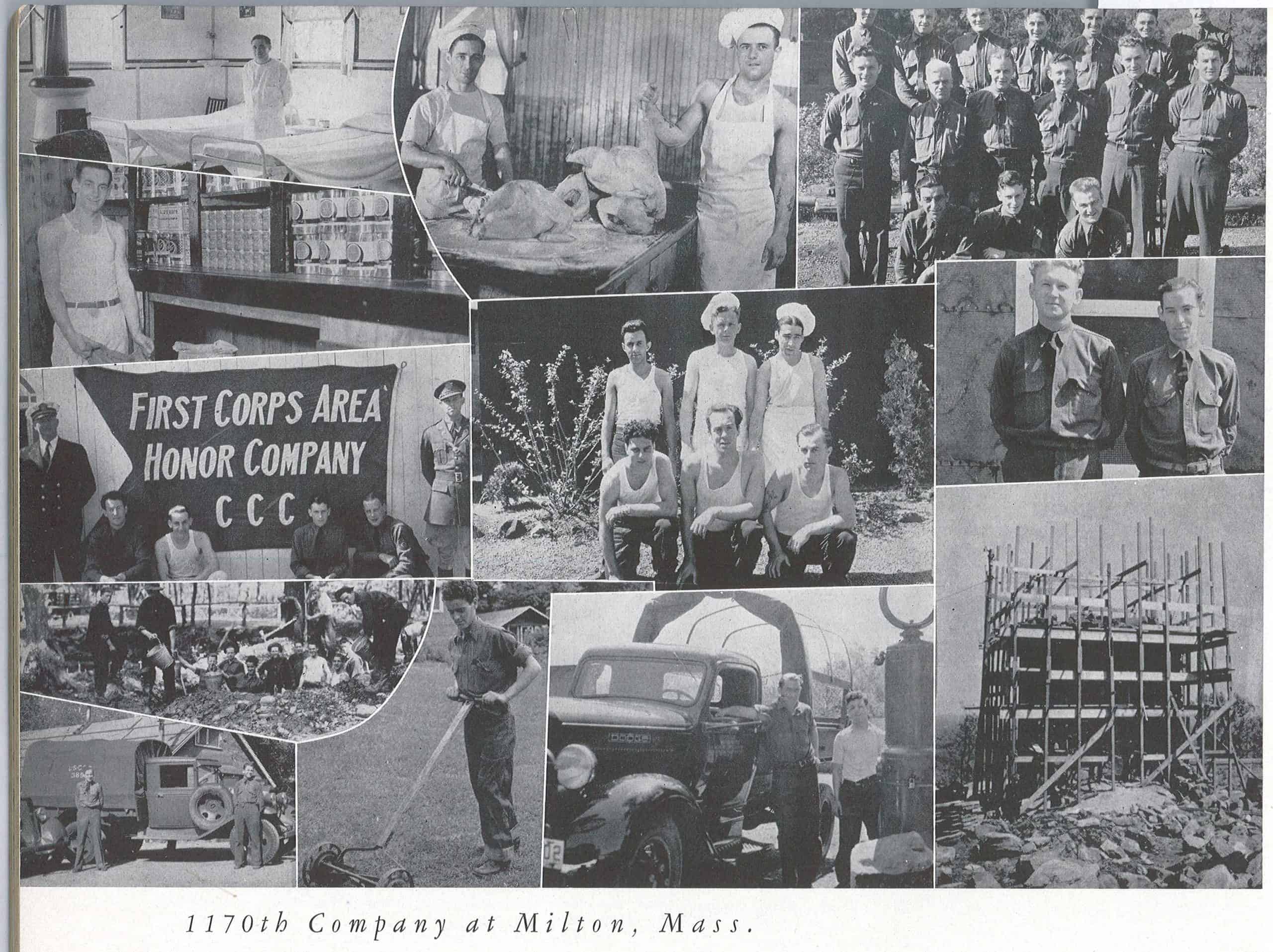 photo credit DCR Archives
Fortunately for the men, life was not all work. The men at the Blue Hills camp enjoyed full-scale operas and concerts in their outdoor amphitheater. They had a choice of educational programs and field trips. The camp included areas for boxing, basketball, volleyball and horseshoes. Sometimes the men went swimming in the water-filled quarries bordering the reservation. The Blue Hills camp was recognized for its high efficiency and “spirit de corps” that repeatedly won them the “Honor Camp of New England” award. 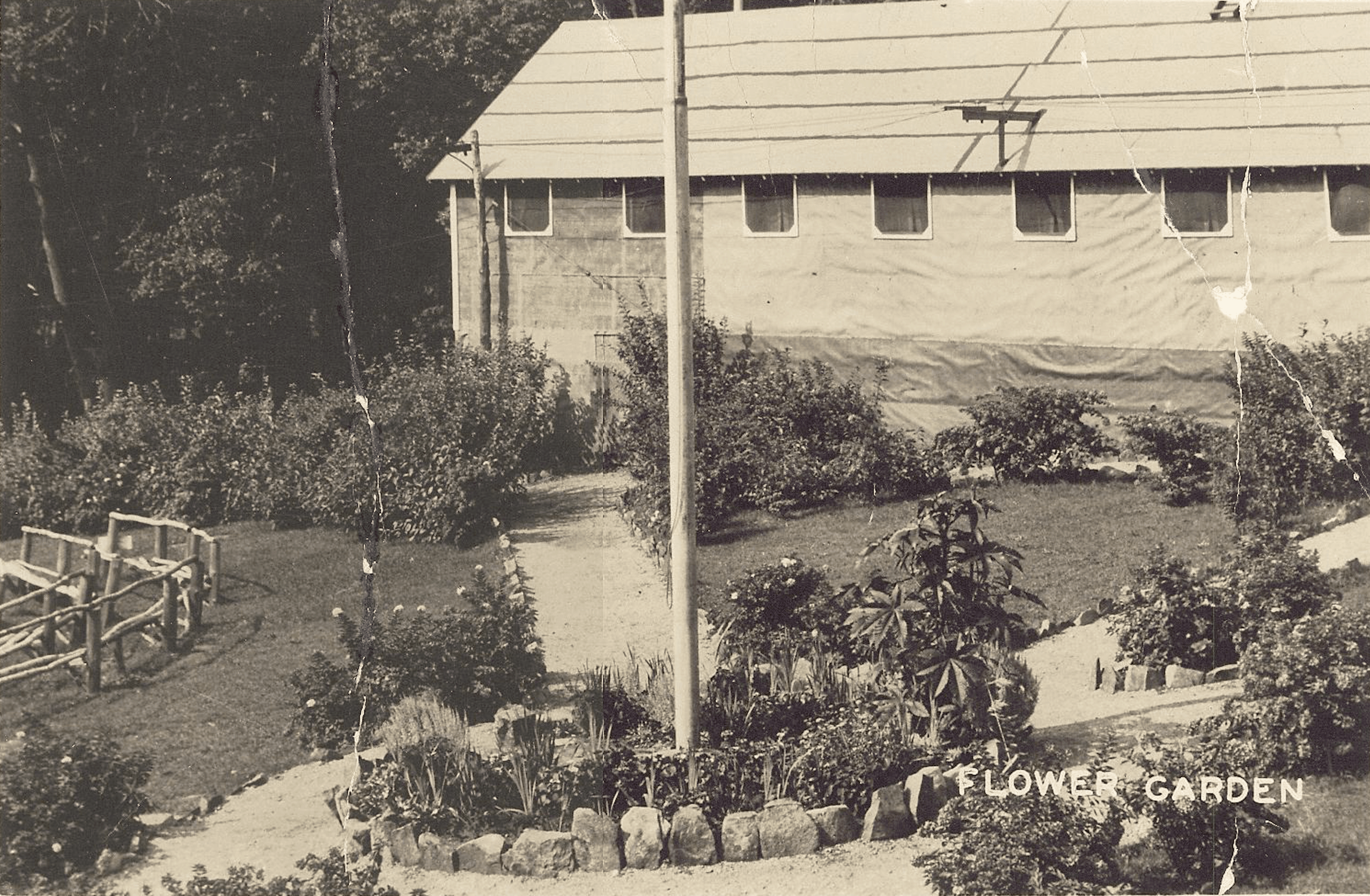 From 1933 to 1937 the CCC workers tackled an extraordinary range of projects. They planted 15,000 trees and shrubs, and were active in insect control, climbing up hundreds of trees to creosote gypsy moth eggs. They fought forest fires, drained swamps for mosquito control, cleared brush and fallen trees. CCC workers built two downhill ski runs and establishing over 25 miles of bridle paths and service roads. Workers created a recreation area at Pakomet Spring including a sizable picnic area with tables, benches and fireplaces.  They worked hard… constructing stone observation towers at Chickatawbut Overlook and Great Blue Hill as well as stone steps up Buck Hill, Nahanton Hill, Great Blue Hill and other hills. 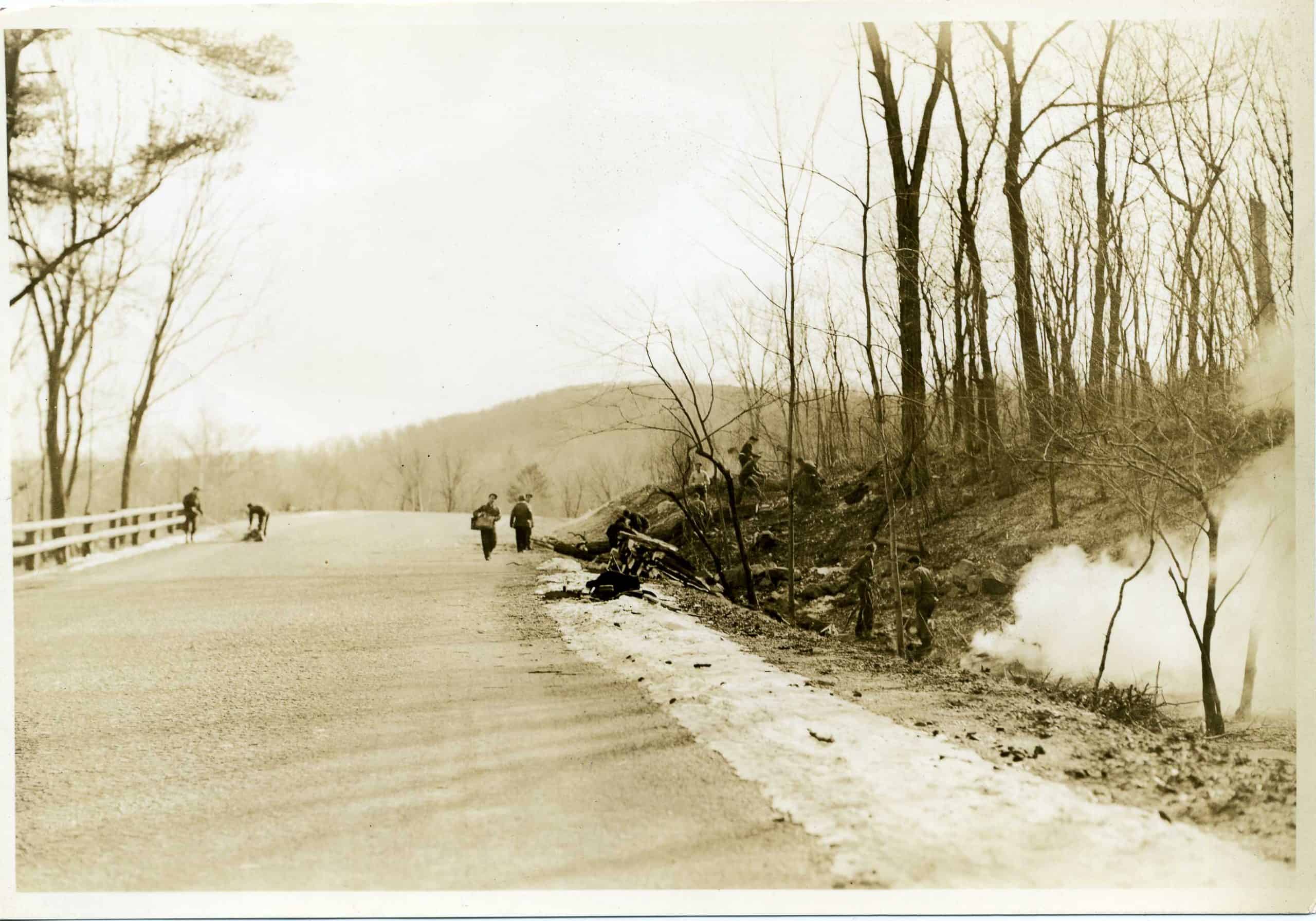 photo credit DCR Archives
The men of the CCC lived and labored in the Blue Hills from 1933 to 1937, flying the Honor Camp pennant until the camp closed on September 28, 1937. Camp equipment was sent to a storage depot and a government caretaker assigned as a security watchman. A smaller side camp was authorized until 1939 to complete final work on the Great Blue Hill observation tower and Pakomet Spring picnic area. By early 1942, all of the 51 CCC Camps in Massachusetts were closed, as federal and state resources were diverted to support the military efforts of World War II.
In 1946, a Commonwealth memo called for the removal of “20 buildings” at the former Blue Hills CCC camp site. “You are to remove all chimneys and fireplaces in the buildings, but not any other masonry.” Today nature is rapidly reclaiming the former camp site but a careful observer may notice concrete foundations, rusty metalworks and ornamental trees and shrubs. Please leave all camp artifacts in place and do not disturb these historic remains.

As you visit the DCR Blue Hills Reservation, be sure to marvel at the amazing contributions of the men of the CCC. Admire the view of the Boston skyline from the stone wall at Chickatawbut Overlook. Climb to the Eliot Observation tower atop Great Blue Hill and enjoy a panoramic vista of greater Boston and beyond. Offer thanks to the World War I veterans and the young men of the Blue Hills CCC Honor Camp. The program not only touched the lives of the enrollees and their families in the 1930’s but also left a lasting legacy of forest improvements and recreational resources across the Blue Hills Reservation… a testament in sweat and stone.

Who was missing from the Civilian Conservation Corps Camp in the Blue Hills?

The Civilian Conservation Corps employed young white and black men, yet the representation and experiences across racial lines were not equal. In 1935, the Civilian Conservation Corps ordered the segregation of CCC camps across the country. Massachusetts’ CCC camps remained integrated due in large part to low funding and a small African American population. A typical CCC camp in Massachusetts had, on average, two African Americans per enrollment period. Despite an amendment outlawing racial discrimination in the CCC, young African American enrollees faced significant discrimination and prejudice.

Women were prohibited from joining the CCC.

Journey to the Civilian Conservation Corps Camp in Milton

Visit the site of the former Civilian Conservation Corps Camp in Milton and journey through a slice of the 1930’s history of President Roosevelt’s Tree Army.

For a 4 ½-mile, flat loop to the former camp location, park at Shea Rink, 651 Willard St, Quincy. You’ll find the trailhead at trail marker 4234 on the north side of the parking lot. Follow the green dots between St. Moritz Ponds. After almost 2 miles, at marker 4091, take a right and then a left at 4083. Follow Sawcut Notch Path to 4042 and take a left to the former CCC Camp, where a sign near old concrete foundations highlights the history and significance of the camp and the men that worked there. Follow Sawcut Notch path back, taking a right at marker 4091 to follow the green dots back to Shea Rink.

Winter can be a time of scarcity. Many animals face the challenges of reduced food, limited water and exposure to the cold. We’ll explore the adaptations of mammals, birds and insects that allow them to[...]
View Calendar
Add