How Many Deer are there in the Blue Hills? 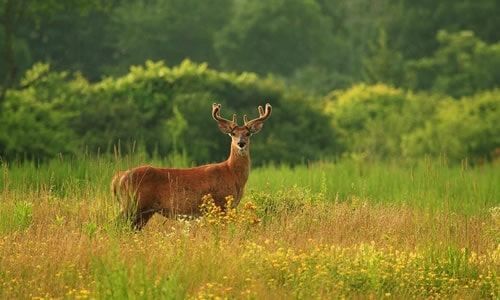 The deer population in the Blue Hills is ten times the desired levels for this region, according to the Department of Fish and Wildlife

The estimated deer population is about 10 times the goal for this region. Such high numbers of deer overgraze the understory (shrubs and small trees), damaging the habitat for other species like songbirds who nest in forest shrubs and low tree branches.

To better understand the affect of deer populations on the forest, the DCR will study the vegetation in the Blue Hills, ideally comparing existing conditions to species reports that taken before the increase in deer populations. The DCR also has installed several ‘exclosures’, or fenced areas that prevent the deer from grazing. The fences are intended to allow the forest to recover from overgrazing.  By comparing the plants that grow inside and outside of the exclosure, researchers will be better able to identify species that have been suppressed by overgrazing.

Read the DCR report on deer populations in the Blue Hills.

To help slow the spread of COVID-19 and to comply with state and federal advisories, we are waiting for the state to develop protocols for volunteers in the park before we confirm any of our[...]
View Calendar
Add